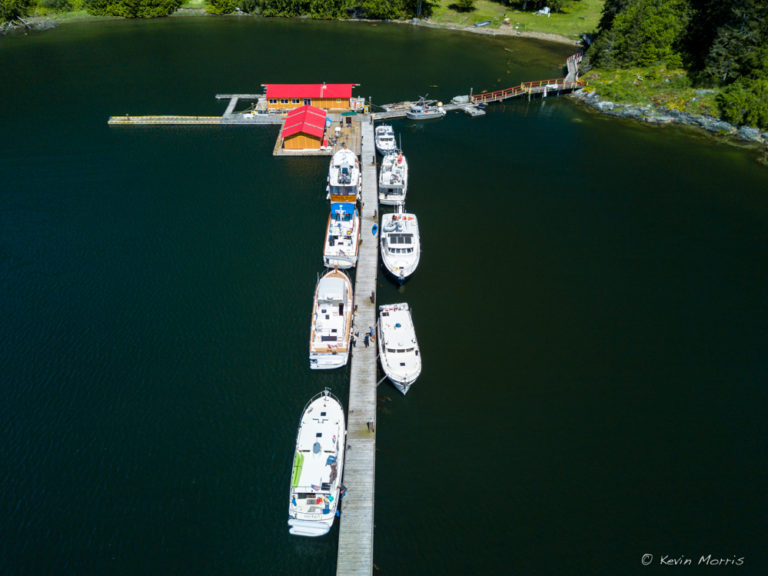 Tucked in behind Range Island at the head of the bay of Port Harvey, BC. Year round moorage, other amenities are seasonal

As of March 2, 2020 I sold the dock, house and land,  I do not know if it will be kept as a marina,
Posted by Gail Cambridge and the late George Cambridge at 16:59 No comments:

The Marina will now be listed with BC Oceanfront. I thoroughly enjoyed the 10 years George and I were able to share with everyone that came to our Marina. This last summer only the dock was open for moorage as I could not run the marina by myself and I could not live out there by myself. If it is not sold by next summer, the dock will be open again for moorage only. It is bittersweet to say goodbye, however the Port Harvey Yacht Club lives on thanks to so many members that want to continue. I am now the Commodore. An annual rendezvous is planned. In 2020 it is at the Thetis Marina on Thetis Island on August 19 and 20, so my whole family can attend. Contact the Fleet Captain Colyn Welsh for more information.
Safe journey to all the friends I have made, i will cherish the memories.
Posted by Gail Cambridge and the late George Cambridge at 12:46 No comments:

I am in the process of working out the details of hiring someone to run the dock in July and August.  Everyone is welcome to tie up to the dock in the meantime but do so at your own risk.  I request that my property is respected and that absolutely no burning occurs.  It has been a very dry winter and the fire hazard is very high.  Please also be aware that since Sabi and I are not there that there may be critters in the bush so please take extra caution if going for a walk.  We scared them off the property before but now they will have free rein.

Thank you to all who we were fortunate to say were our friends.  You will be truly missed and I will miss the fun that was had every summer. It is a memory I will Cherish forever and the Port Harvey Yacht Club lives on

Safe Journey
Posted by Gail Cambridge and the late George Cambridge at 20:13 No comments:

This is the Passage Plans for the PHYC in 2019.


As at 29th November 2018
This is the PHYC’s planned cruise in 2019 as part of the activities of the PHYC and is scheduled to commence Wednesday June 11th or 12th in the Gulf Islands and to complete Saturday June 22nd at Egmont after visiting the Princess Louisa Inlet. This plan is scheduled to take 12 days running on 4 days for 24 hours and covering 127 n-miles at an average speed of 5.3 knots. Participants are required to make all of their own reservations and they should inform the marina operators that they are part of the Port Harvey Yacht Club.
This plan is subject to any of the four “W’s;
(1)  the Whims of the Fleet Capt, (2) the Whining of his mate, (3) the Weather and (4) the Wishes of club members.
This edition of the Passage Plan is as a result (1) and (4) above.
Tuesday 11th and Wednesday 12th June                                 To Thetis Island.
Dock at Thetis Island Marina Phone: 250-246-3464
Email: thetisislandresorts@gmail.com with water, power and internet as well as a limited supply of groceries. Kuper [now known as Penelaku] and Thetis Islands were originally joined by a narrow strip of land until 1905 when a canal, known as “The Cut” was dug to allow the passage of small boats. A bridge over the canal was constructed, however, it was destroyed in 1946.
Thetis Island got its name from H.M.S. Thetis (in turn named after Thetis the Nereid, a sea nymph daughter of Zeus), a British 36-gun frigate that was on the Pacific station from 1851 to 1853 and surveyed the area.
Thursday 13th June                               At Thetis Island
Take part in the PHYC Rendezvous activities. Refer to the Rendezvous information sheets.
Thetis island is 2,560 acres (1,036 ha) in size. It is approximately two miles (3.2 kilometres) wide and three miles (4.8 kilometres) long north to south. Two north to south land ridges define the east and west sides of the island. Burchell Hill is 591 metres (1,939 feet) above sea level, and forms the high point on the west side of Thetis island, and Moore Hill is 585 metres (1,919 feet) above sea level, and forms the high point ridge on the east side of the island.

The cruise starts out with a visit to Chemainus to take in a performance of Manna Mia on Friday June 14th and on to Pirates Cove on Saturday June 15th.
Friday 14th June                     Thetis Island to Chemainus – 3.9 n-miles.
Depart the marina and proceed across Stuart Channel to the town of Chemainus and dock at the Chemainus Municipal Dock [250-715-8186 or e-mail harmen.chemainus.munimarina@gmail.com] with power, water, washrooms, garbage drop and Wi-Fi. Chemainus is a community in the Chemainus Valley on the east coast of southern Vancouver Island. Founded as an unincorporated logging town in 1858, Chemainus is now famous for its 39 outdoor murals and its theatre. This year, Chemainus Theatre Festival celebrates a wide range of musicals including at the time of our visit, Mamma Mia. The theatre provides an excellent dinner before the show. Reservations for both the marina and the theatre/restaurant should be made early.

The James Bruce Falls and Chatterbox Falls are on Loquilts Creek, a large stream that enters the head of the inlet.
In June 1792 Captain Vancouver explored Jervis Inlet to its end and apparently found the entrance to Princess Louisa Inlet but did not enter as the tide was ebbing through Malibu Rapids at the time.
James F. "Mac" MacDonald purchased the core of the park, 45 acres (18 ha), in 1919 and donated it to the Princess Louisa International Society in 1953. It was acquired by BC Parks in 1964. Much of the remaining land surrounding the inlet has been acquired and added to the park in following years. Hamilton Island, renamed MacDonald Island, is now a part of the park as well.
In 1940 Herman Caspar, who was rumored to have homesteaded at the entrance of the inlet, sold the land to Thomas F. Hamilton for $500. Casper was actually a squatter and had no legal right to the land. Hamilton, an American aviation executive, did buy all the land surrounding Princess Louisa Inlet with the intent on developing it with a series of themed luxury resorts to cater to visiting yachtsmen and Hollywood celebrities. However, only one resort was built at the entrance of the inlet, the Malibu Club which was named after Hamilton's yacht the Malibu. In 1950, the resort was closed and abandoned due to a polio outbreak and quarantine. The property was later sold to Young Life in 1953 and they have successfully operated it as a summer camp for teenagers.
The inlet may have been named for Princess Louise, the fourth daughter of Queen Victoria, whose husband was the Marquess of Lorne, Governor General of Canada. The vice regal couple traveled extensively in Canada. Princess Louise spent three months in Victoria, British Columbia, in 1876 and was popular to the point that when it was announced that the transcontinental railway would pass through the Selkirk Range at the Kicking Horse Pass into what has since become Vancouver, rather than by the Yellowhead Pass to Bute Inlet and then to Victoria, Premier Robert Beavan asked  whether it would be possible for Vancouver Island to become a separate kingdom with Princess Louise as its Queen.
The more accepted theory is that the inlet is named for Queen Victoria's mother, Princess Victoria of Saxe-Coburg-Saalfeld, who was born Mary Louise Victoria. Adjacent Prince of Wales Reach was named after Edward VII when he was the Prince of Wales. Princess Royal Reach was named after another one of Queen Victoria’s daughters, Empress Frederick of Germany. Five mountains around Queens Reach are named after children of Queen Victoria: Mount Victoria, Mount Alfred, Mount Alice, Mount Arthur and Mount Helena.
No matter who the inlet was named for, some government official got the spelling wrong with Louisa instead of Louise.
The floats and some of the surrounding land are maintained by the society. Connie is a Life-long member of the society.
The society has purchased various parcels of property around the inlet which they gave to the BC Parks. More information on the society’s web-site www.princesslouisa.bc.ca .
Thursday 20th June                               At Princess Louisa Inlet
Spend the days in this beautiful park making use of the covered fire-pit and the walk-ways to the falls. Take the dinghies to explore MacDonald Island.
We may be able, if it is available, to take on fresh water

Friday 21st June                                    Princess Louisa Inlet to Egmont – 33.5 n-miles
Depart the dock to transit the Malibu Rapids at the high-water slack and proceed back down Jervis Inlet to Sechelt Inlet. Dock at the Backeddy Resort & Marina with fuel – gas and diesel, water, moorage (reservations recommended) and ice. Some power is available, depending where you dock.
Backeddy Resort and Marina advises that they have a strong current running at the docks on both a flood and ebb tide. They have a dock crew to assist you and they recommend you hail them on VHF 66A before you dock so they can be there to assist. When docking, please approach with bow to the current for maximum control.
The Backeddy Pub is a favourite for locals and visitors alike. Please note their pub does not serve minors, but they do have a restaurant area for families with children/minors and a great little picnic area overlooking the water and marina. They also take reservations for large bookings and they can accommodate additional buffet style service in their party room.
Saturday 22nd June                             At Egmont
For the energetic, there is a serene hike in the rainforest from the trail head of Skookumchuk Narrows Provincial Park to the Skookumchuk Narrows observation points for the spectacular waves and whirlpools. Even when there is not a big tide that produce such a spectacular water display, the trail is the perfect place to experience our pacific northwest rainforest. The hike is relatively flat and takes approximately 45 to 60 minutes each way. Washrooms are located at each end of the trail.

This is the completion of the PHYC cruise. Participates can now head off on their own or they may, if they wish, return to the Gulf Islands along with the Seajay to take in the Valley Power Squadron’s Sail past at Sidney Spit and Canada Day celebrations at the Port of Sidney.


Posted by Gail Cambridge and the late George Cambridge at 08:00 No comments:

THE MARINA IS CURRENTLY CLOSED